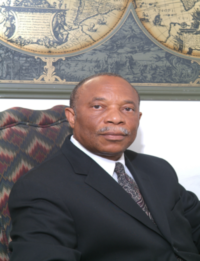 The co-founder and the president of the first Private Refinery in Africa, and located at Eket in Akwa Ibom State, Nigeria.

After a short stint with California Rural Health Federation as a health program specialist and latterly as Marketing Director in 1981, Mr. Amanam discovered that there was no trade between the United States and most developing nations. At the same time, most returned merchandise like shoes, garments, furnishing, and accessories were either given away as donations or sent to landfills. He funded Amtrat International to bridge the enormous gap between the insatiable appetite of the United States for new and improved merchandise and the basic needs of the growing populations in the developing countries.  By adhering to strict quality control and logistics, he was able to form coalitions with various national and cultural business leaders.

The business grew to several million dollars in revenue and served over 55 countries at its peak.  Mr. Amanam retired from Amtrat International Corporation in 2014 to spend his energy developing Amakpe International Refineries.

30 Million USD project, funded by the Government of Afghanistan, to rebuild and furnish the school system in the country damaged by the war. Project was completed in December 2007.

2007 – Businessman of the year, US National Republican Congressional Committees (NRCC)

1999 – Exporter of the year, United States Department of Commerce.

1994 – Certificate  of Appreciation, City of Miami